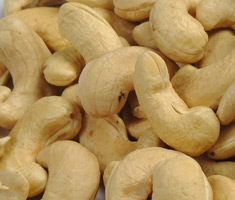 Cashew nuts, a richly sweet product of the cashew tree, have gained popularity in North America and Europe not only for their succulent flavor but for health benefits, too. Whether roasted, salted, sugared or covered in chocolate, the cashew nut, often used as a flavorful complement to appetizers, main dishes and deserts, packs a mix of nutrients and minerals not found in many common foods.

Cashew nuts, native to equatorial South America which was discovered by Portuguese missionaries in the 15th century, are actually seeds, found growing on the end of the cashew apple, an edible and nutrient rich South American treat that is too fragile to export to North America or Europe.

Also known by the botanical name Anacardium occidentale, the cashew is a close relative of mangos, pistachios, poison ivy and poison oak. It was first introduced on a worldwide scale by Portuguese explorers in South America in the 16th century, but international trade didn't take off until the 1920s.

Sometimes called “nature's vitamin pill,” cashew nuts, which now rank #1 among nut crops in the world with 4.1 billion pounds produced in 2002 , have been used to promote wellness for centuries.

The Portuguese later brought this wonderful nut to India and East Africa. In India, it was first introduced in Goa. From there, it slowly trickled down the Konkan coastline to Malabar and the rest of Kerala. Towards the last quarter of the 20th century, it spread to other parts of India.

The role of the Portuguese in bringing the cashewnut to Kerala and neighbouring states is best illustrated by the fact that, in Malayalam (the language of Kerala), it is still called 'Parangi Andi', meaning 'The Portuguese Nut'.

RESTORED TO ITS OLD GLORY

Long before the development of any cuisine-in fact, before farming or civilization itself began - man gathered nuts for food. As cultures evolved, so did food habits. Dietary changes in the 20th century led to a gradual shift from many excellent plant foods - like nuts - towards animal - based foods are rich in protein. While animal-based foods are rich in protein, they are also high in saturated fat which is not good for the heart. But the world's romance with non-vegetarian foods lost much of its ardour as the century edged towards a close. Today, we are rediscovering the nutritional value of plant foods. So nuts are back. And cashew with them.
© 2013 lakshmanandcompany.com. All rights Reserved